Experience the magic of a thousand and one nights in Abu Dhabi, combined with ultra-modern architecture. A glittering skyline, white sandy beaches and spectacular amusement parks promise holiday fun for the whole family. Away from the big city canyons, Abu Dhabi attracts with a wild and romantic landscape, green oases and historical monuments.

Below we present you the most exciting tours, most beautiful attractions and best sights in Abu Dhabi. 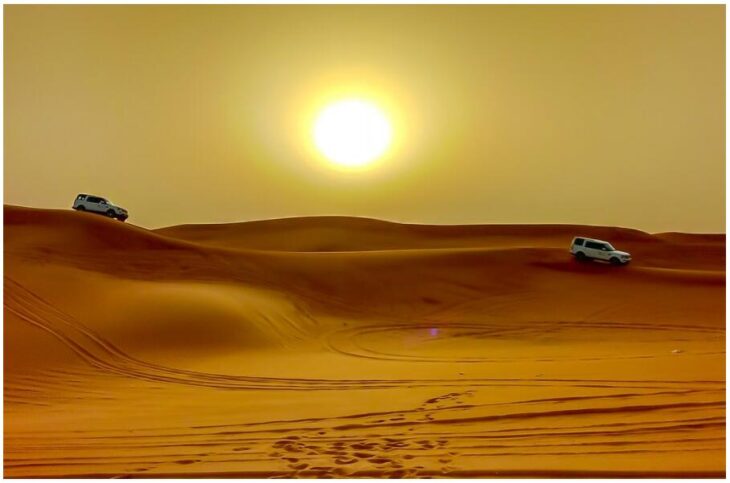 Ferrari World, the largest covered amusement park in the world, is located on Yas Island north of the airport. But there are also many sights outside. On an area of ​​8 hectares, everything revolves around the world of racing. 20 rides await visitors, including Formula Rossa.

The fastest roller coaster in the world accelerates to 240 km / h and simulates visitors what it feels like in a Formula 1 Bolliden. Extreme G-forces can also be experienced in the G-Force, which transports its passengers 62 meters vertically. Those who like it more relaxed can visit the Ferrari models on display. For guests who want to get behind the wheel, the park offers racing courses for beginners.

Visitors to the Sheikh Zayed Grand Mosque marvel at Abu Dhabi’s symbiosis of ultra-modern architecture and traditional Arab architecture. It opened in 2007 and is one of the largest Islamic places of worship in the world. 40,000 believers find space in the superlative sacred building, which cost 545 million US dollars. The gleaming white domes of the mosque are reflected in the surrounding water basin, and no expense has been spared inside either.

High-quality materials such as marble, Swarovski crystals and gold leaf decorate the interior, in which, among other things, the largest hand-woven carpet in the world is kept. Even non-Muslim visitors can marvel at the inside of the Sheikh Zayed Mosque, provided they wear appropriate clothing. An evening visit with atmospheric lighting is particularly worthwhile.

Visitors can discover the rich cultural heritage of the emirate in the southeast on the border with Oman. The “Garden City of the Arabian Gulf” used to be an important oasis that traders passed on their way to Oman. In 2011, the historic buildings of Al Ain were added to the UNESCO World Heritage List as evidence of the early settlement of Abu Dhabi.

Sophisticated irrigation ensures that Al Ain is a lush green. One of the most popular sights is Al-Jahili, a lavishly restored fortress with gardens inside. Spices and clothes are for sale in Al Ain’s souks, which are still traditionally open-air, and visitors can watch vendors haggle over the best price in the camel market.

In the middle of the urban area of ​​Abu Dhabi lies the Mangrove National Park, a huge nature reserve that is home to 75% of the mangroves in the United Arab Emirates. The tropical saltwater plants are of great importance for the cleanliness of the sea and protection against flooding. They also offer refuge for a wide variety of animals, including crabs, turtles and manatees, but also water birds such as flamingos and herons.

Guests can rent a number of boats and explore the park’s scenic lagoon on their own. Numerous small fish cavort between the high tap roots of the mangroves. In the quiet, which is only interrupted by the chirping of birds, visitors almost forget that they are only a few kilometers from a big city.

The mountain Jebel Hafeet (often also: Jebel Hafit) is one of the most beautiful sights for nature lovers and everyone who wants to sniff the mountain air. Millions of years of erosion shaped its limestone into interesting rock formations. Jebel Hafeet is 1350 meters high, making it the highest point in the emirate. With numerous plant and animal species, the mountain has the most diverse flora and fauna in the emirate. Shy animals such as bats, snakes and lizards are native here.

Many visitors come here to relax in the hot thermal springs, view 5,000-year-old tombs and explore the extensive cave systems. At the top of the mountain you can enjoy a wonderful view of the nearby Al Ain. The atmosphere is particularly beautiful at sunrise, when the surrounding desert slowly wakes up. 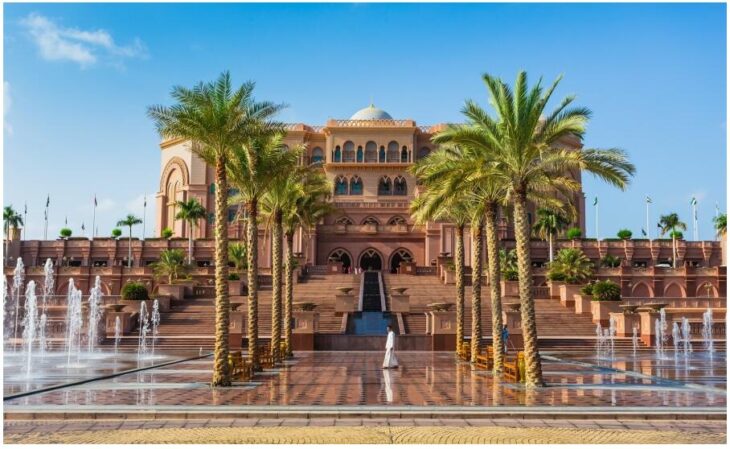 In 2005, a hotel that is one of the most luxurious in the world was opened in Abu Dhabi. Known from the film “Fast and Furious”, the hotel stands like no other building for the wealth and splendor of the desert state. The Emirates Palace, which combines traditional Arabic architecture with state-of-the-art technology, cost 3 billion dollars to build. A total of 115 domes adorn the mega-complex, which has a private beach and even its own marina and two helicopter stations.

A 40 meter high arch and silver fountains mark the entrance. Also worth seeing is the lobby of the Emirate Palace, which is adorned by a 2.5-ton chandelier. A visit is also worthwhile at night, because then the domes of the hotel shine in bright colors. Non-hotel guests are allowed to visit certain areas of the facility. A traditional tea time in a luxury hotel is very popular!

Due to the lack of space, artificial islands are repeatedly being created off the coast of the emirate or, as in the case of Saadiyat, existing headlands are being expanded by filling. On Saadiyat, the government’s goal was to create a superlative cultural district. This is where the new Louvre Abu Dhabi art museum is located, where works from antiquity to the 21st century are presented. Thanks to a cooperation with the French original, the Louvre Abu Dhabi is already one of the most important art museums of our time.

The Performing Arts Center with theaters, concert halls and an opera as well as the Zayed National Museum are also located on Saadiyat Island. There, visitors learn more about the settlement of the emirate over the past 200,000 years. The island’s visitor center is the Manarat Al Saadiyat Gallery, where contemporary artists are exhibited. Those who prefer to take it easy will find a kilometer-long dream beach and the chilled Saadiyat Beach Club not far from the cultural highlights.

Visitors who want to understand what life in Abu Dhabi was like in bygone eras should head to the Heritage Village on Al Kasir Island. This is the reconstruction of an oasis village, complete with a market, mosque and tent city. Traditional craftsmen present their skills in pottery, glass blowing, weaving, spinning and metal processing.

Younger guests can stroke camels in the Heritage Village, for example, and the market offers a wide range of spices, clothes and leather goods. Replicas of traditional Arab sailing ships can be admired right on the beach. There visitors also have a great view of the Abu Dhabi skyline.

Falcon breeding has a long tradition in the Emirates, and Abu Dhabi is home to the most famous clinic in the world for injured animals. The Falcon Hospital offers interesting insights and exciting tours for visitors. Here you can learn more about these impressive birds. Many tours are offered as a combination with a desert safari.

The desert safaris usually lead to the largest continuous sandy desert in the world, the Rub al-Khali. Here it goes through the dunes at a rapid pace, before the driver lets a large part of the air out of the tires for better grip. The robust land cruisers are made for this adrenaline rush, at the end a refreshment in the Bedouin camp beckons.

Abu Dhabi is not only a very hot holiday destination in midsummer and the water off the coast also has warm temperatures all year round. How good that visitors can cool off in the emirate’s adventure pools. One of the most spectacular water parks is Yas Waterworld on the Yas Island of the same name. With its slides of various degrees of difficulty, the park is a paradise for large and small bathers.

The very brave dare to try the Liwa Loop. This slide literally pulls the ground away from guests’ feet and they almost slide in free fall. Those who like it quieter can visit Cinesplash, a 5D cinema with shaking seats and real water effects. In addition, the adventure pool has the longest hanging roller coaster in the world with the Bandit Bomber. 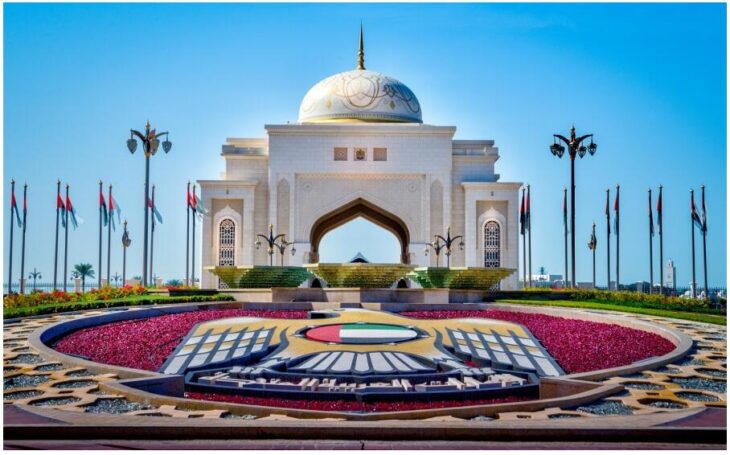